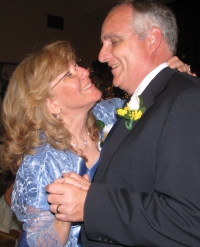 After being engaged three different times in about a year and a half, I met Eric. As we were getting acquainted, when we first met at a church dance, I found out he was going to Ogden the next day to visit some family. I had left my sewing machine in Salt Lake with a friend and had no way to get it, so I asked if he would drop me off there on his way to Ogden and pick me up on his way home.

He then said we were just friends, to which the lady said, “Well, you have to start somewhere.” (The next time she saw us, we were engaged.) We got a chuckle out of it, thinking nothing of it at the time.

One evening shortly after that, my roommates and I were headed out to a rodeo. We opened our front door and there was Eric. He asked if I wanted to do something with him. We invited him to the rodeo. When the rodeo clown tried to sit in between him and me and my roommates, Eric said, “Hey, they are with me!” The clown yelled down to the other clown, “Hey, guess what we have here? One guy with three girls!” The other clown yelled up to Eric, “Way to go Brigham!”

Eric and I continued to mostly hang out, spending long hours talking. One night after going to the movies with him I realized I was falling in love with him. A good friend had come to see me the next day. She had told me over and over not to get involved with Eric because he was fickle and would hurt me. I told her how I loved him and she seemed supportive.

However, the next day at church, I walked into Sunday School and lo and behold there was Eric with a girl I did not know practically sitting on his lap. He looked rather uncomfortable. In fact it reminded me of a kid finding a stray cat and holding it tight, and the cat trying to get away. I was heartsick. I was also embarrassed because of what my friend had said to me about Eric, and here it was playing out in front of her. That day was excruciating, but when I’d close my eyes I kept having the thought of Eric and I walking hand in hand from the Provo, Utah LDS Temple.

Some time later Eric came over to help me think through a predicament I had about my living arrangements. We talked for a long time. At the end of the conversation we stood and Eric wrapped his arms around me to give me a hug. As he did so, I felt like a warm blanket had wrapped around me. I felt like I belonged and had come home. As he started to leave he looked at me to say “Goodbye”. As I gazed into his eyes, a bonding took place at that moment that was powerful. He looked at me and said, “I do not know what it is, but there is something very special between us.”

Then a few days later, he stopped by to drop off a book I had left in his car. He sat on the couch next to me, and as we sat there I had the feeling that if he were to ask me to marry him I would say “Yes.” Then almost immediately doubts set in that I could not seem to fight.

A few days later, he asked me to marry him. I told him if he had asked me a few days before I would have said “Yes,” but since then, I had been doubting. We talked about it and finally decided to go talk to our church leader. As we shared our dilemma he got really excited and said, “I knew it about your two!”

We still didn’t know what to do. We knew we loved each other but neither of us felt like we were ready to get married. When we got back to the new place I was moving into, we decided to kneel down and ask the Lord what to do. As Eric said the prayer, I once again felt like a warm blanket was being wrapped around us.

When we stood and he started to leave, he stopped and looked into my eyes and asked me to marry him. I had the feeling to say yes. The fear and doubt had gone.

It has been 31 years (in December) that we married in the Provo, Utah LDS temple. Life with my sweetheart and eternal companion just keeps getting more like a fairy tale romance. The thought of spending eternity with him fills my heart with delight!

This is one of the “How We Met” stories featured here on “Laura’s Strengthening Marriage Blog.” You can enter to win a Romantic Getaway to The Anniversary Inn by sending us a favorite photo of you and your spouse, and/or a wedding or engagement photo, by Saturday, February 14th, 2009. Tell us the story of how you met, how many years you’ve been married, plus something you do to strengthen your marriage (500 words or less). Send your photo and story here. We’d love to receive your story and your photos even if it is after February 14th!