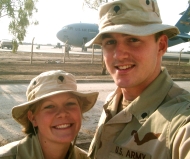 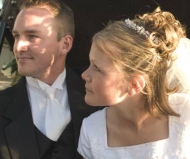 
In Love and At War
We tell people that we have a unique story. Not because we are very different, but because of the circumstances under which we met and fell in love. It’s what movies and romance novels are made of.

I was one of 174 anxious U.S. Army soldiers on a military transport headed for Kuwait where we would receive our orders to move into Iraq. I found an available seat in the front row with extra leg room. I figured it would come in handy for the 23 hour flight we had before us.

As I sat down in my seat and got my gear situated, Specialist Hansen introduced herself. We talked a lot as we crossed the ocean and Europe moving into the Middle East.

At one point during the flight she pulled out her military sized Bible and a Book of Mormon and started reading. “So you’re one of those, huh?” I let on like I wasn’t LDS and had a little fun before telling her that I was a Mormon as well.

We had some great conversations during the flight, and had fun watching movies together as well. I woke up at one point during the flight to find her sleeping on my shoulder. She seemed exhausted. She hadn’t had much time to prepare to go to war with our unit.

She volunteered to go to Iraq at the last minute just a few days prior to us leaving. Her military unit was staying in Fort Carson, Colorado.

We spent the next 15 months of our lives together at war. We spent hours of waiting for sirens to silence, wearing our gas masks as we sweated out the fear that surrounded us.

It goes without saying that we experienced a lot of worry, and had many conversations, and developed a closeness that made us inseparable as we got orders on day two of the invasion to move our medical logistics unit into Iraq.

We traveled from dusk until just after midnight where we stopped at a safe zone. Jackie and I slept on top of my Hummer to avoid the desert floor and the things that lived on and under it. It was pretty difficult to sleep.

The canvas cover on top of the Hummer was more comfortable than sleeping on top of the hood, but the hood was warmer. We switched places in the middle of the night. After several hours of sleep, we moved our convoy to a northern camp where we would spend the rest of the war doing what we did best in Iraq…fall in love.

Our relationship was very professional at first with some occasional, harmless flirting. We were very good friends and got to spend a lot of time together because we were on the commander’s staff. She was an NBC Warfare Specialist (Nuclear, Biological, Chemical) and I was the Supply Sergeant and Unit Armorer.

She was very forward and actually asked me one day if I felt that there was any “tension” between us.

We ended up spending even more time together several nights on guard duty. We shared everything about everything in those guard towers and bonded, but it was still just a friendship.

One night after our day’s duties were done we decided to hike up to our traditional hang-out spot on top of an airplane hangar that looked like a large, cement turtle shell. We would sit up there and watch the sunset, and then stay awhile to watch the fire fights.

With all the dust in the air, the sunsets were always fire-red. And the way her skin glowed when that light touched her face reminds me every day why we ended up kissing that night.

We were such good friends that we ended up laughing after several attempts to kiss, but we spent enough time up there that night that we mastered it! : )

Later I went home on leave for two weeks and bought an engagement ring for her. It was small, but I didn’t want to have her lose anything out there in the Iraqi desert.

I don’t think we spent a single day after that without smiling ear to ear. There were several times that we were formally written up for looking “too happy.” It was worth it though. 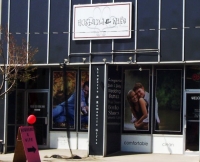 We do many things to strengthen our marriage, but we have found a special mission together to help strengthen other peoples’ marriages as well. We are the proud owners of a one-of-a-kind store in American Fork, Utah (and online) called “Husband & Wife.” This store is dedicated to strengthening marriages and ensuring that husbands and wives are not only intimate lovers, but best friends as well.

“Husband & Wife” is one of the few physical (and online) stores promoting a tasteful, comfortable and clean atmosphere where couples can find new and exciting ways to spice up their marriage. Products are free of graphic images and offensive or crude language. There is a large selection of lingerie available online–all displayed on mannequins. Lingerie and other romantic gifts can be purchased in their Utah store — 57 E. Main Street, American Fork, UT 84003, 801-756-LOVE (5683) or online at www.HusbandAndWife.net.

This is one of the “How We Met” stories featured here on “Laura’s Strengthening Marriage Blog.” You can enter to win a Romantic Getaway to The Anniversary Inn by sending us a favorite photo of you and your spouse, and/or a wedding or engagement photo, by Saturday, February 14th, 2009. Tell us the story of how you met, how many years you’ve been married, plus something you do to strengthen your marriage (500 words or less). Send your photo and story here. We’d love to receive your story and your photos even if it is after February 14th!

Licensed Marriage and Family Therapist, and Certified Sex Therapist, Laura M. Brotherson is the founder of "The Marital Intimacy Institute"" with a mission to help couples create "sextraordinary" marriages. She counsels with couples and individuals in private practice (and online) and is passionate about helping couples navigate the intricacies of intimacy--specializing in healthy sexuality, sex therapy, and sex addiction. She is the author of the best-selling book And They Were Not Ashamed — Strengthening Marriage through Sexual Fulfillment, Knowing HER Intimately: 12 Keys for Creating a Sextraordinary Marriage, and her latest book --From Honeymoon to Happily Ever After: 23 Keys to Prepare for a Sextraordinary Marriage. As a Certified Family Life Educator, Laura is also actively engaged in helping to build strong marriages and families by providing marriage education through Couples Cruises, articles, newsletters, radio and television broadcasts, "The Marital Intimacy Show" podcasts, and presenting at conferences and workshops. Laura is a regular contributor to the KSL Television "Studio 5" morning show.

Sexy Challenge — “Add Some Lingerie to Your Lovemaking”