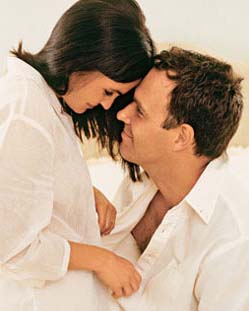 What do you think?

The Bait and Switch

This question reminds me of the many men who feel that their wives were very passionate and affectionate before marriage then found that that didn’t translate into their marriage relationship. One husband even called it a “bait and switch.”

It’s my contention that women don’t mean to do this on purpose. They are simply poorly prepared for a healthy sexual relationship in marriage and often don’t understand the message and consequences of their flirty behavior.

It’s one thing for a woman to seem like “a tease” prior to marriage (though I don’t think most women mean to, at least consciously). It’s something completely different for them to be prepared to follow through on that tease within marriage!

It’s all about a healthy sense of self and one’s sexuality. This is not something that is generally taught, modeled or developed in young women (or men). Thus we can see some of the roots of sexual frustration in marriage.

What Is Sexual Self-Confidence?

Sexual self-confidence is the self-assurance and God-assurance, even, that one is loved and acceptable to one’s self and to God. This is coupled with sexual knowledge and application within marriage. Feeling sexy means you like and accept yourself–complete with flaws and imperfections–and embrace your sexuality. Being at peace with oneself is key to unlocking one’s sexual potential in marriage.

To dress immodestly in public is fairly easy. You get lots of attention for being “eye candy,” without having to “do” anything to follow through with the consequences of your appearance. It’s the tease without any follow-through.

To dress revealingly for one’s husband requires a willingness or ability to go where that might lead! To dress provocatively in the “bedroom” generally means that the clothing is ultimately going to come off. This creates a whole bunch of issues for many women.

Self-image, body image, feelings about one’s spouse and sex in general all become significant factors. It’s a terribly vulnerable and anxiety-causing endeavor. Thus it takes much more self-assurance to dress alluringly for one’s husband than it does to do so in public. It also takes being at peace with one’s body, one’s sexuality, and even one’s spouse.

It generally comes down to a lack or an emptiness within themselves, which makes the attention received too much for some to resist. When someone is lacking in self-assurance, then it’s easier to fall prey to compensating for it by dressing provocatively.

Dressing modestly as young girls, or as women, is part of what builds self-esteem, especially when it totally goes against societal norms, and often takes a lot of thought and effort to do so.

Dressing modestly invites others to interact with you as a whole person instead of relying on the distractions of overtly noticeable physical characteristics. Self-confidence is best built upon righteousness and a personal relationship with God, not attention to body parts. It’s a powerful confidence builder when we do things that are difficult, but right.

One of the best things we can do to discourage people from dressing inappropriately in public is to encourage them to work on their feelings of self-worth, rather than merely being another voice telling them to stop it. It would be similar to telling a hungry child to stop eating the cookies on the table to tell a woman to dress modestly if she is filling a void with the attention she receives.

Sexy is a State of Mind

How important is this sexual self-confidence for a wife? Let’s just say it’s the difference between a mediocre marriage and a passionate intimate relationship. Truly liking one’s self is the best aphrodisiac for a healthy and fulfilling sexual relationship.

Sexy is a state of mind. I like the statement, “I like who I am and I’m happy to share that with you!” If a woman, in particular, does not like herself inside and out, it is very difficult for her to share herself freely and fully with her husband.

Because a woman’s sexuality is primarily a product of her thoughts and beliefs about herself, her spouse, and sex in general, what goes on in a woman’s mind is of utmost importance. Having healthy, positive and productive thoughts, core beliefs, feelings, and attitudes form the foundation for true sexiness.

A sexy state of mind is a healthy and positive creation cultivated specifically for a mutually fulfilling and passionate marriage relationship. Beyond physical foreplay, the wise husband also pays careful attention to the psychological foreplay he engenders in his wife.

What Do Looks Have to Do with It?

Some have asked what one’s looks have to do with their sexual self-confidence. To be honest…the answer is NOTHING! Looks can be very deceiving.

I’ve worked with women who because of their appearance you would think would feel very sexy and enjoy sexual intimacy. They have all the supposed right “looks,” but they don’t really like themselves or their bodies (or their husbands, or sex itself). They find it very difficult to be or to feel sexy or to share themselves and their body with their spouse.

There are many other women who would not necessarily win a cover-girl contest, but who have developed their sexuality and their feelings about themselves, and their bodies, to the point of being very comfortable and even passionate within the sexual relationship. It’s not really about one’s looks, though it helps to at least feel like you are doing the best you can to take care of your physical body.

Making peace with one’s self and building a relationship with God are the keys to developing healthy self-confidence. Adding sexual knowledge and intimate learning with one’s spouse to that foundation, sexual self-confidence is created.

It’s not widely promoted for women to develop their sexual self-confidence, but it is being promoted here for the benefit of building many stronger and more intimate marriage relationships. The benefits are many! Just think of the positive and lasting legacy you will pass on to your children, in addition to the pleasurable benefits you’ll receive for yourself and your spouse!