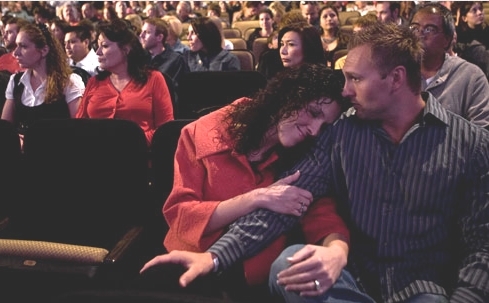 GRAPEVINE, Tex. — And on the seventh day, there was no rest for married couples. A week after the Rev. Ed Young challenged husbands and wives among his flock of 20,000 to strengthen their unions through Seven Days of Sex, his advice was — keep it going. Mr. Young, an author, a television host and the pastor of the evangelical Fellowship Church, issued his call for a week of “congregational copulation” among married couples on Nov. 16, while pacing in front of a large bed. Sometimes he reclined on the paisley coverlet while flipping through a Bible, emphasizing his point that it is time for the church to put God back in the bed. “Today we’re beginning this sexperiment, seven days of sex,” he said, with his characteristic mix of humor, showmanship and Scripture. “How to move from whining about the economy to whoopee!”On Sunday parishioners at the Grapevine branch watched a prerecorded sermon from Mr. Young and his wife, Lisa, on jumbo screens over a candlelit stage. “I know there’s been a lot of love going around this week, among the married couples,” one of the church musicians said, strumming on a guitar before a crowd of about 3,000. Mrs. Young, dressed in knee-high black boots and jeans, said that after a week of having sex every day, or close to it, “some of us are smiling.” For others grappling with infidelities, addictions to pornography or other bitter hurts, “there’s been some pain; hopefully there’s been some forgiveness, too.”

Mr. Young advised the couples to “keep on doing what you’ve been doing this week. We should try to double up the amount of intimacy we have in marriage. And when I say intimacy, I don’t mean holding hands in the park or a back rub.” Mr. Young, known simply as Ed to his parishioners, and his wife, both 47, have been married for 26 years and have four children, including twins. They have firsthand experience with some of the barriers to an intimate sex life in marriage, including careers, exhaustion, outside commitments, and “kids,” a word that Mr. Young told church members stands for “keeping intimacy at a distance successfully.” But if you make the time to have sex, it will bring you closer to your spouse and to God, he has said. You will perform better at work, leave a loving legacy for your children to follow and may even prevent an extramarital affair. “If you’ve said, ‘I do,’ do it,” he said. As for single people, “I don’t know, try eating chocolate cake,” he said. The sex-starved marriage has been the topic of at least two recent books, “365 Nights” and “Just Do It.” But Mr. Young’s call from the pulpit gave the discussion an added charge. It should not, in his view. This is not a gimmick or a publicity stunt, Mr. Young says. Just look at the sensuousness of the Song of Solomon, or Genesis: “two shall become one flesh,” or Corinthians: “do not deprive each other of sexual relations.” “For some reason the church has not talked about it, but we need to,” he said, speaking by telephone Friday night on his way to South Africa for a mission trip. There is no shame in marital sex, he added, “God thought it up, it was his idea.” Those who attend Fellowship’s location here or one of several satellite churches in the Dallas area and one in Miami are used to Mr. Young’s provocative style. (The real “f word” in the marital boudoir, he says, is “forgiveness.”) But the sex challenge was a bit much for some of his church members, who sat with arms crossed in uncomfortable silence, he recalls, while many in the audience gave him an enthusiastic applause. One parishioner, Rob Hulsey, 25, said his Baptist relatives raised their eyebrows about it, but he summed up the reaction of many husbands at Fellowship Church when he first heard about the sex challenge — “Yay!” A week later, he and his wife, who are expecting a baby and have two older children, could not stop holding hands during the sermon. His wife, Madeline Hulsey, 32, said she was just as thrilled to spend a week focusing on her husband. Usually, “we start to kiss, and it’s knock knock knock, Mom!” she said. Others found that, like smiling when you are not particularly happy, having sex when they did not feel like it improved their mood. Just eight months into their marriage, Amy and Cody Waddell had not been very amorous since Cody admitted he had had an affair. “Intimacy has been a struggle for us, working through all that,” Ms. Waddell said. “This week really brought us back together, physically and emotionally.” It is not always easy to devote time for your spouse, Pastor Young admitted. Just three days into the sex challenge he said he was so tired after getting up before dawn to talk about the importance of having more sex in marriage that he crashed on the bed around 8 p.m. on Tuesday night. Mrs. Young tried to shake him awake, telling her husband, “Come on, it’s the sex challenge.” But Mr. Young murmured, “Let’s just double up tomorrow,” and went back to sleep.~~~~~~~~~~~~~~~~~~~~~ Reprinted from: http://www.nytimes.com/2008/11/24/us/24sex.html?em By GRETEL C. KOVACH Published: November 23, 2008