Home » Blog » One Real but Wrinkled Wife or a Harem of Airbrushed Virtual Goddesses?

One Real but Wrinkled Wife or a Harem of Airbrushed Virtual Goddesses? 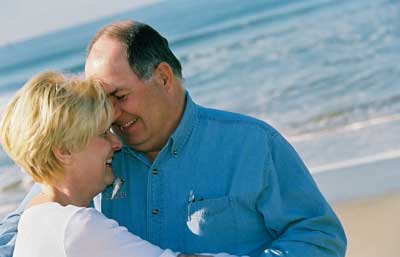 Marnia Robinson and Gary Wilson probe porn’s secret recipe for keeping the high going. Key ingredient: the convincing illusion of so many willing participants eager to have sex with little old “moi”—the viewer. (This is where the the brain’s illogical, gullible, pleasure-driven Responder screams, “This is real!”)

What could be better than that dreamy vision; that fantastic mirage?

How about a real life “one-and-only”?

Last Valentine’s day, I was quite attuned to my wife of twenty-two years. Jenny and I went to grab lunch together, which consisted mostly of me waiting in the car with our two little chatterbugs while she ran into Target to grab heart-shaped treats for our fourth grader’s class.

Why did my heart skip a beat when I saw that it really was her in the blue sweats walking out the door of the store? Why did we have so much fun shoveling down twenty bucks worth of Thai food in under ten minutes? Why did I feel just a little giddy when I asked her to be my valentine and she smiled?

I wanted her to have a good day, so I splurged at Amazon and got her an old audio version of a poetry collection, Grow Old Along With Me, the Best Is Yet to Be. The excerpt I heard long ago on the radio had Ed Asner reading the title poem by Robert Browning. On that program they also read another poem about the comfortable familiarity of the folds of wrinkly skin in a beloved’s face.

Those poems affected me. I’ve talked with Jenny about them several times since.

The books are still fifteen bucks online, so who would have guessed that a still shrink-wrapped audio cassette version would be so affordable (wink)? I splurged and dropped a dollar (plus four for shipping and handling) to let my one-and-only know she still is…my one-and-only!

I didn’t go to bed that night thinking that it was an amazing day. I have come to enjoy those little charged-up moments and connected comforts as a part of life. Sure, they’re a great part of life, but their also familiar and reliable. Expected!

The Real Thing Lingers on The Heart

In our culture, which so prizes beauty and youth, it may seem downright odd that an aging couple could be more and more pleased by each other as the years pass. Nonetheless, it’s a phenomenon that doesn’t peter out in middle age.

If you know a handful of elderly couples, think about those among them who are still intensely drawn to one another. Watching them is evidence enough that attraction is not primarily based on attractiveness.

While this phenomenon remains fertile ground for poets, the inner workings of this magic have also been scrutinized by scientists. We know that the brain’s dopamine pleasure system can be desensitized over time if it is subjected to addictive levels of sexual stimulation. Which hints that the converse is true: it can remain highly sensitized among monogamous individuals who reserve their lust for their one and only.

Not only that, but another potent chemical is at work here as well. Oxytocin is like relationship super-glue. To compare: a dump of dopamine is the reward our brains give us for finding something new and exciting, but it can quickly dissipate and leave us hankering. Oxytocin, on the other hand, is the gift our brain gives us that keeps on giving.

Unlike dopamine, we get more oxytocin when we’re with someone familiar and beloved. (Oxytocin is released in breastfeeding mothers and their infants, and you won’t see either of them looking around for a new and more exciting partner.)

While we become desensitized and less affected by dopamine over time, our sensitivity to oxytocin is heightened over time. Seeing, touching, and hearing a devoted partner gains more and more power over time to trigger the release of this chemical.

A ninety-year-old woman walks into the room and her husband can’t hold back a sigh. “You can see why I love her!” The rest of us think, “Well, actually…no.” But there’s no doubting his sincerity.

Deadening the Capacity to Connect

Surely some of them would not be such eager consumers if they realized that they’re impeding their capacity to fully attach to and enjoy their relationship with a one-and-only.

One reader responded to Wolf’s claim this way: “I hate porn. Why? Because I’m one of the younger guys who have grown up with the easy accessibility of the internet. It’s easy to see whatever you want with just a quick Google search. I hate it because I allowed myself to be immersed into it and it’s become a part of me. I got married, had two kids, and now I’m divorced and my wife has remarried. I have been through so much pain in my life, and I attribute it to precisely what Ms. Wolf has explained in this article. Even now, my mind has been desensitized, and I work my way through it. It’s a constant battle. I know that I’ve been desensitized–I see it and feel it. Emotionally, I’ve scarred myself. I wouldn’t wish this on anyone who wishes to have a family and a wife to cherish.”

Neurosurgeon Donald Hilton compares a porn-ravenous young adult to a confused insect on the verge of extermination. Here’s why: In place of chemical insecticides, sex attractants are now commonly used by farmers to control insect populations. Air currents carry the mist of condensed female pheromones out over crops and orchards.

Science journalist Anna Salleh describes what happens next: “The male either becomes confused and doesn’t know which direction to turn for the female, or he becomes desensitized to the lower levels of pheromones naturally given out by the female and has no incentive to mate with her… The insects follow the pheromone trail into the trap.”

Fortunately, we do have something on those confused little critters. We can choose. We need not keep swimming around in a “super-stimulation-concentrate.” We can give up porn’s fleeting pleasures, restore our sensitivity, and cultivate a lifestyle that’s more conducive to lasting love. In the process, we’ll discover what we might have never suspected: one real, but wrinkled wife really is better than an endless harem of airbrushed virtual goddesses.

Watch this video discussing what wives can do to help.

Home » Blog » One Real but Wrinkled Wife or a Harem of Airbrushed Virtual Goddesses?

« Never Too Early… StrengtheningMarriage.com Discount at The Anniversary Inn »